Right after I finished my master’s degree as an ICT engineer, my girlfriend and I held a much-needed vacation. During this period, we had many discussions of what we should do with our career and how we would like to start it off. She already had a job at this point, which she would be starting within the next few months.

I did not, on the other hand, have any job currently awaiting me. Given my knowledge of the education, I did not fear that I would not find a job. Engineers in Denmark are currently in high demand. I, therefore, felt that it was more a question of finding the right job than finding one at all. This meant that I had to figure out what the right job for me would be. What did I like to do and how would I get to the point where I could make a living of it?

It was at this point I realized the unique and valuable position that I was currently in. As already mentioned, engineers in Denmark are currently in high demand. Numbers show that the demand per year is rising quicker than the supply per year [1, p. 60]. This means that companies are constantly attempting to headhunt engineers from partners and competitors. Generally speaking, this has a negative effect on the industry and the country. It lowers productivity and gives the engineers too much power in terms of a job- and salary negotiation. Given this situation, many companies and organizations have been getting involved in the promotion of engineering educations.

Hoping that by showing the many variations of engineers it will attract more people to apply for these educations. These companies and organizations include among others IDA, Engineer the Future, Huawei and Danfoss. Naturally, the seven Danish engineering universities are also part of this: AAU, AU, DTU, KU, SDU, VIA, and Absalon University College. 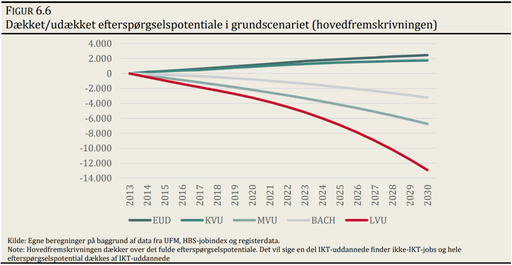 Amount of missing engineers and other technical educated students per year. [2, p. 5] 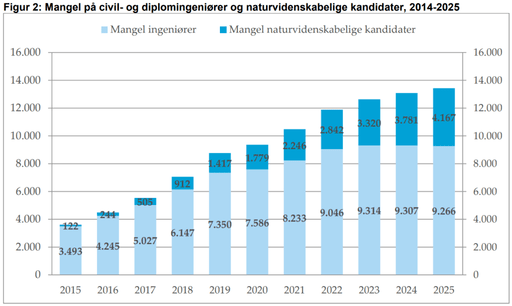 All of these have attempted to show the variation of an engineering education and career. They did this by using young students or newly graduated to tell what is like to be an engineer. I have actually several times worked for these types of event. For example when I was representing the organization Engineer the Future at an education conference or when I was doing social media promotion while in China with Huawei.

What To Do About It?

So here I was, a newly graduated engineer with both experience and a passion for showing the attractive and fun sides of the life as an engineer. A report made by IDA and Engineer the Future showed that young people at high schools* had easier by identifying themselves with young engineers. According to this report, it increased the chances of them investigating more into technical educations. Given this conclusion of the report, it was arguably better for me to start now by promoting engineering education, then in ten years, where high school students won’t be able to identify themselves with me.

It might then be relevant to ask why I thought that I would be a good representation of engineers. To answer this, it will first require investigating what the problem with today’s image of technical educations are.

In the same report by IDA and Engineer the Future, they outline several image problems which young people have of these educations [3, p. 5]. They, among others, believe that the educations are too difficult, and they at the same time fear getting stocked in a boring job for the rest of their life. How should I be able to change this image? Well, I am definitely not the classical stereotype of an engineer. I am outgoing and passionate about presenting and conveying knowledge. I like to travel the world and have that as one of my ambitions for my future career. It would not be my mission to tell them that all engineers are the same, but I would actively attempt to break the society’s stereotype of engineers.

So far, I have used a lot of effort on introducing my situation and the problem which I would attempt to tackle, but how was I actually going to make an impact. This is where INTEGU or rather “Ingeniørens Teknologi Guide” comes into the picture. My idea was to start a company, which would assist in improving the society’s current perspective of engineering. INTEGU separated into three primary services: education, industry and social media.

Promoting engineering educations would require direct contact with high school students. Here I would be able to either function as a guest presenter, demonstrating some relevant technology or concept for the students. At the same time, I would also be able to substitute a teacher, in case my curriculum would be suitable for the normal courses’ agenda.

How do I know that I would be able to fulfill the job and responsibilities of being a teacher? I actually already thought several times at both elementary schools and high school as a substitute teacher or as a representation for either my university, Aalborg University (AAU), or the organization, Engineer the Future. I always took the job seriously and constantly tried to improve and renew my courses, so that it would fit the audience. Therefore, I also received a good feedback from the students and their teachers.

During my research, I was in contact with several high schools and elementary school, who all believed the idea had potential. However, the educational institutes were not willing to let me teach a classroom. At least not until I was able to that I had support from authorized organizations or universities. 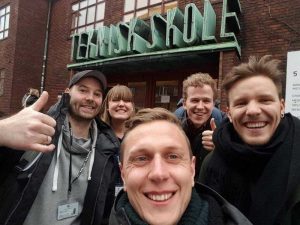 End of a day teaching about the internet at NEXT Copenhagen.

As mentioned before, the image of today’s engineering educations consisted of several problems [3, p. 5]. One of them being the fear of ending up in a boring job. Therefore, I also felt that it would be necessary to put focus on engineers after leaving the university. I would achieve this focus by setting up workshop and tours at major engineering companies. Thereby letting high school students come and see what it means to be an engineer.

The link between the educational institutes and industry has been identified to be of great importance. They all believe that closing the gap between these two fields will increase the chances of more young people applying for engineering studies.

This service of INTEGU was definitely the area which I used the last time and resources on while in the research period. I, therefore, do not in any way claim that I had these types of contacts to the industry. However, I do believe that it would be possible to gain these contacts within a reasonable timeframe. After all, I would be allowing companies to make an advertisement for both the engineering field of work, but also for themselves. This type of advertisement is today costing several thousands of kroner. For example in the case of an educational conference, where they would still have to compete against other companies.

For this reason, I established an INTEGU profile of several social media. At the same time, I also created some conceptual content as a proof of concept. This would demonstrate the appearance which I intended INTEGU to have online. This could thereby be used as a material for pitching INTEGU to stakeholders.

The social media platform, which I used the most effort was definitely YouTube, as you will be able to see from two of the sample videos shown below.

After months of attempting to scramble together any sort of support from either companies or organizations, such as IDA and Engineer the Future, or the universities, I felt that the job that I would be doing was not appreciated. All of the organizations were aware of the problem and could agree with my reasoning for why my idea could have potential. However, none of them were willing to show any type of financial support. I knew from the beginning that this company was never going to make me rich. That was fine by me. I had the opportunity to work with what I was passionate about. As long as I was able to put food on the table I was fine by doing this for one-two years. Whatever happened after that I would have to figure out.

After consulting with entrepreneur advisers and becoming part of an entrepreneurship community, I altered and modified my business model. However, without any results. Finally, I had enough! I decided that it simply was not worth the effort. For each month I was attempting to scample together a minimal financial support, I was at the same time practically saying no to a high paid salary as a software engineer. In the end, I decided to quit the ideas of starting INTEGU and instead of starting job hunting. In the following period I had a lot of promising job interview, and reasonably quickly I found a matching job position at Capgemini Sogeti.

What Did I Learn?

I learned that starting a company is just as difficult as people tell you. It requires a lot of communication and negotiation with a variety of stakeholders. If you are not aware of your partners and competitor’s agenda and core values, you won’t be able to do business with them.

The company pitch is also something which you should not underestimate. I learned this while pitching INTEGU for the thousands time on the phone. Pitching can be a valuable soft skill, which if used correctly can win you many battles. However, doing it correctly requires you to know who your audience is and in what context you will be presenting your idea to them.

It might not have been the right point in time to start INTEGU. Currently, I see that more and more companies are getting involved in the promotion of engineering educations. Likewise, a special agreement “Teknologipagten”[4] has been established between IDA and the Danish government. Through this agreement, they will attempt to align their effort towards the same goal. Perhaps, it would have been easier to gain support for INTEGU a year later, who knows? For me, this is a finished chapter, but I hope that I one day will be giving the opportunity to start a company again because it is a period of great reflection and a steep learning curve.