The Adapter Pattern is a simple, yet convenient, utility, which you will most certainly find good use of.

The pattern uses and interface and its implementation to create a layer around another object, which then allows the behavior of the object to be converted into a desired form.

Although it manages the behaviour of another class, is does not change it in any way. It should therefore not come as a shock that the adapter pattern is categorized as a structual design pattern.

It is one of the many design patterns, which utilize interfaces, to enable decoupled code structure. Similar to the for example the strategy pattern. 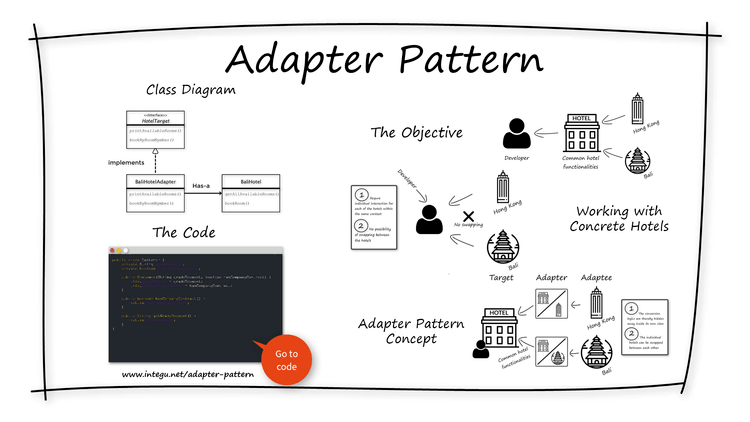 The objective for this tutorial will be to create a universal hotel booking platform. This service should be able to show available rooms and book a room.

The problem occurs when we discover that our list of hotels all require their own unique communication pattern. As an example, some hotels can print out the list of available rooms themselves. Meanwhile others only provide us with a list of rooms and require us to print them out (e.g. BaliHotel).

This is of cause an inconvenience for us, since we cannot rely on the hotels to follow the same rules. However, this is where the adapter pattern can help us.

Before showing how the adapter pattern will be able to help us solve the objective, let’s see how it could be solved without. 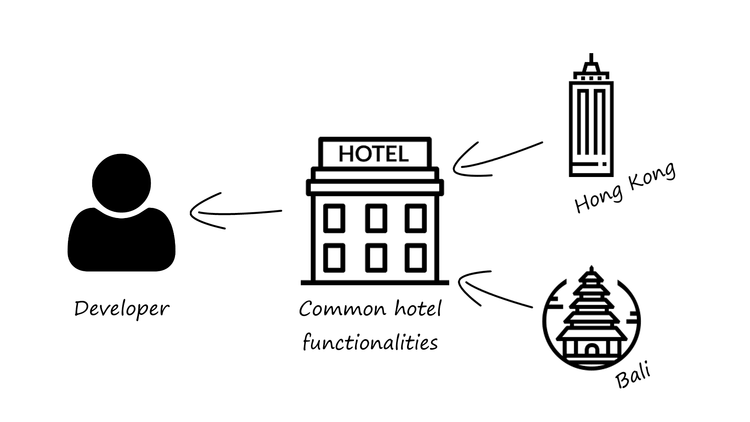 If we were to solve the basic objective without the adapter pattern, we could potentially be forced to code the interaction for each of the hotels within the same context.

This means we would have to identify how each of the hotel’s functionalities work for each time we were to use it. Dependent on how the hotel classes have been setup, this will likely cause a lot of frustration for any developer.

Additionally, since the hotels do not share a common functionality pattern, it is neither possible to swap between the hotels. This structure is therefore most certainly not decoupled. 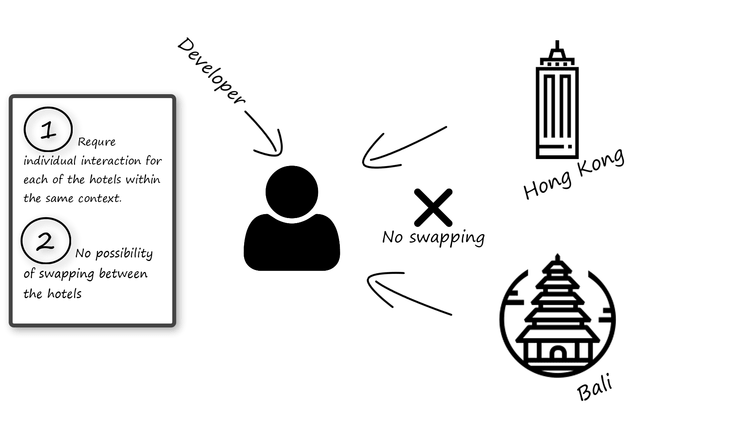 Step 3 - Concept Of The Adapter Pattern

Now that we have highlighted the downsides of solving the objective without the adapter pattern, let’s see how the design pattern works and how it can help us.

The adapter pattern can be separated into three classes: The Target, the Adapter, and the Adaptee.

The target is the intended common functionality which we want all hotel classes to follow. This is therefore represented by an interface, which states the two main methods of all hotels: printAvailableRooms() and bookByRoomNumber.

The conversion logics are thereby hidden away inside its own class. This enables the main context to only work with the target interface. Thereby enabling decoupled code structure, as the interface versions of the individual hotels can be swapped between each other.

The final type of class, the adaptee, refers to the object, which the adapter is converting. In this case, that would be the individual hotel classes.

With the core concept of the adapter design pattern outlined, it has become time to investigate the class diagram. 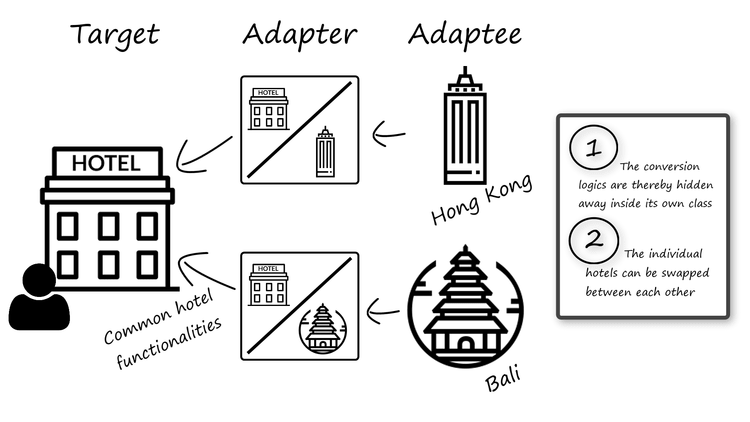 As we can see from the class diagram, the adapter pattern is nothing more then one interface and its implementation.

As explained in the previous section the interface is a representation of how we expect to interact with all our hotel classes (Target), while the implementation is the specific changes required to convert each of the hotels functionalities into those of the target (Adapter).

Since the implementation of the target interface is specific to a hotel class (Adaptee), it will contain an instance of that specific class. 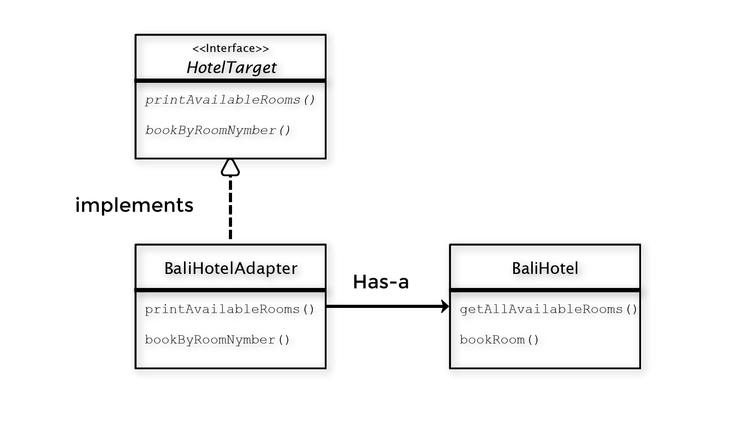 Hopefully, this will be sufficient for you to learn to identify and implement the adapter pattern in your future endeavors as a software developer.

How to use the Adapter Pattern